My name is Ellie, I am 12 years old and I am dyslexic.

I have three sisters, one is dyslexic, one is dyspraxic and my youngest sister is dyslexic and dyspraxic. We all need allot of extra help with learning and every time we get a new teacher my mum has to explain our needs all over again.

My mum is on the committee of Dyslexia Scotland South East and I helped her last year when she was making up information boxes for schools during Dyslexia Awareness week. It felt good to be helping to raise awareness because dyslexia seemed to be invisible somehow.

This made me think about how we wear poppies to remember soldiers and pink ribbons to raise awareness for breast cancer so I decided wearing a ribbon could help raise awareness for dyslexia. At first I thought I would just get some ribbon and ask my friends and family to wear them during Dyslexia awareness week but then my mum told her committee and they all thought it was a great idea and even said they would pay for them and help to get other people to wear them to.

One of the committee members told me about the Disney friends for change Youth Service America who give out grants to help young people like me to fund their ideas. So I applied for a grant to buy my ribbons.

When I applied I had to think about my aim and goals for this project.

To raise awareness and a better understanding of dyslexia in Edinburgh, the Lothian’s and around Scotland.

To distribute ribbons in local schools, local libraries and in the Scottish parliament. A long term goal is for the ribbons to be known as the Dyslexia Awareness ribbon in Scotland and for people to wear it during Dyslexia Awareness week every year. By making more people aware of what dyslexia is and how it can affect learning I hope to help other children not to be embarrassed about their dyslexia and not to hide it.

My sisters and I would really like people to know how difficult life can be for dyslexics (and dyspraxics) and to learn about the challenges we face every day. I would like everyone to know that people with dyslexia are not stupid, they just learn in a different way. I think it would help remove the stigma sometimes attached to being dyslexic and some of the weird things people believe about those who have dyslexia.

When I received the grant from Disney I had a look online and chose what colour and design of ribbon I would like. I chose light blue with Dyslexia Scotland SE printed on it. I got my older sister Bryony to design a poster which had the Disney logo on it and had posters and t-shirts printed. 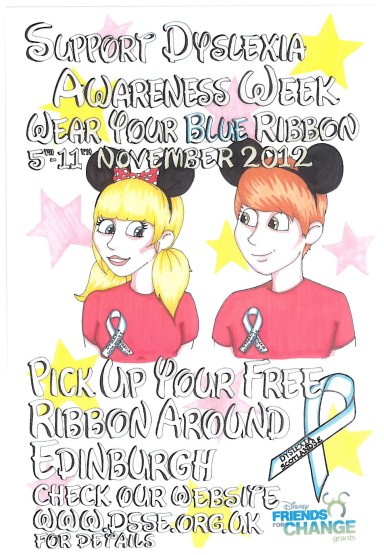 I decided to write to The First Minister Alex Salmond to ask if I could come along to the Parliament to meet him and give him one of my ribbons to wear. I believe that if changes are made in schools then he is the person that can do it. The Parliament wrote back to me and said The Minister for Learning Alistair Allan would like to meet me, I was delighted and when I went to the Scottish Parliament I met not only The First Minister but also the Minister of learning and Margaret Mitchell MSP.  We spoke about Dyslexia, my campaign and how dyslexia can affect people and I asked them if there was anything they could do to help teachers understand.  They were attending a debate that evening in the main Chamber which was on Dyslexia and they invited me along.  The debate was very interesting and all the MSP were talking about me.  This made me realise my campaign was working! I left a box of Ribbons in the parliament for other members to pick up and wear. Kate who was a lovely lady who helps organise things in the parliament told me she would distribute them the next day. 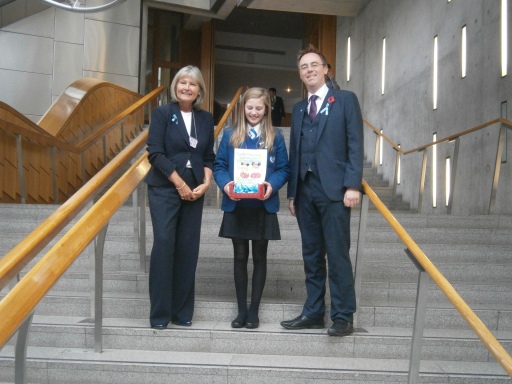 I also wrote to Sir Jackie Stewart who is the president of Dyslexia Scotland. He wrote me a letter telling me that he thought my idea was fantastic and that he would try to help. He wants people to know that dyslexics are clever and they shouldn’t be embarrassed about their difficulties. He said ‘we are wearing ribbons as we are trying our best not only for ourselves but for other people with learning problems to get ahead in life….’

Imagine, Jackie Stewart writing to me!

I sent him some ribbons and he sent me a picture of himself wearing it, all of his office staff were wearing them too.