The Young scot contacted Lena from Dyslexia Scotland who then contacted my Mum to ask they if they could interview me and put the clip on their website and YouTube channel during Dyslexia Awareness Week, so that was my next stop. I really enjoyed being interviewed and was so grateful to DS for setting up a twibbon link where all my friends on facebook and famous people on twitter could put a blue ribbon on their page during DAW.  You can see my clip on You Tube here. The Scottish Youth parliament held their big conference during DAW and they all wore my ribbons, Kate who works for the SYP told them about my campaign, she said they were all very impressed.

Next, I took my ribbons along to CALL Scotland.  This is an organisation that creates software for children with SEN’s , they make a lot of things like school textbooks accessible for lots of children who can’t read very well or have problems accessing the text. Allan Wilson who works there has helped my sister and me a lot with our computers and IPads.  They were having a meeting that day with people from different councils who visit lots of schools, Allan helped me tell them about my campaign and we gave them all ribbons. 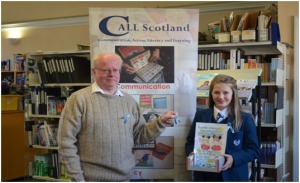 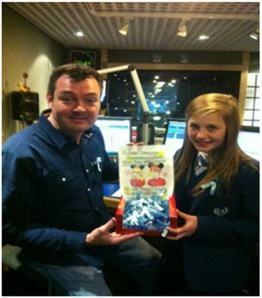 Next stop, Forth One where I met the celebrity DJ Grant Stott, he was really impressed with what I was doing and said he would give all the people at the radio station a blue ribbon. He said that he would wear one and tell everyone what it was for.

It was really really cool visiting him as I got to go into his studio while he was live on air!!

The opening of Dyslexia Scotland’s DAW was happening at The Central Library in Edinburgh, Cathy Magee who is the Director of DS asked if I would like to attend. I was invited to the special drinks and nibbles beforehand and talked to people about my blue ribbons.  Cathy had organised to have Keith Cook Fencing Champion and the man who owns The Tiso Outdoor companies to come along and give a speech then answer questions. Cathy asked me if I would like to take part and be on the panel.  I also gave a little talk to everyone about my blue ribbons.  I was delighted and everyone seemed to be very interested and fashionably impressed by my idea.  I discovered that I actually like public speaking and I think I am good at it! 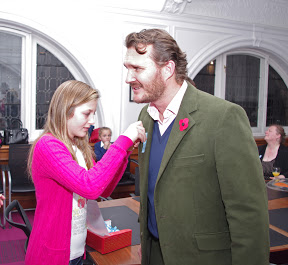 Next Stop ..  The Edinburgh Filmhouse.  As part of DAW they were showing a film about dyslexia and Cathy had organised another panel which I was to be part off.  Moira Thomson (my mentor for the project) and my dad came along with me.  We gave out blue ribbons before the film and afterwards I answered some questions about my dyslexia and how it affects me.  I think I gave positive answers to people as I wanted them to realise there is always a way to achieve, sometimes you just have to persevere in finding it.

My Next Stop was The Lord Advocate.  My Mum, sister, Anne Warden (my dyslexic tutor), Dawn, Niamh and of course me, all went along.  Dawn works in the court offices and she had been giving ribbons out all week but she did not expect to get the response she did.  People started talking about dyslexia and others said they were dyslexic , that is the thing everyone knows someone who is dyslexic or they are dyslexic themselves.   This was great news; my campaign was really working and raising awareness.  When I met The Lord Advocate, he told me that someone who is willing to speak out about their difficulties needs courage but for someone to speak out for everyone else takes someone really special.  He was very interested in my campaign and asked if I would like a job in the media because he thought my interview was so good.  We had a lovely chat in his very impressive office and I am glad I am not reading all those books he has there! 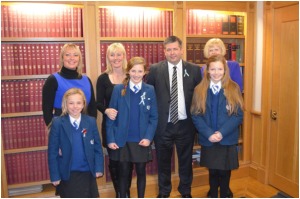 When I was on the internet I noticed textHelp (a company that make software that can help dyslexics)  had some comments about my blue ribbons on their twitter page, my mum helped me get in touch with them and we sent them some ribbons.

My Blue ribbon Campaign has been a fantastic success because of all the people that have helped and joined in.  Lots of other children from other schools asked their schools if they could join in and they all said YES.  My own school gave out ribbons and everyone had them on their blazers for DAW.

The Schools and companies that took part were :

I must not forget  that The Edinburgh Evening News put an article titled “Girls goes to Parliament over Dyslexia” in their newspaper and STV news aired a piece on the television where they interviewed my sisters and myself about our dyslexia and Cathy Magee spoke about how dyslexia can affect people’s lives.

And it hasn’t ended there, I have been asked to go into other schools to give talks about my dyslexia and how it can affect me.  Enquire are going to interview me for their podcast.  I am also going to a meeting with DSSE and DS to see how we can take the ribbon forward next year on a bigger scale as so many people wanted to be involved this year but we just didn’t have enough ribbons.  There were even people in America talking about it, and I know Davie Jones from the cross party has something special for me to do……

I have had a great time organising and carrying out my campaign and I would like to thank everyone at Disney for making it possible.   I could not have done all this myself and I am especially grateful to my Mum and Dad for being there, Moira for supporting me as my mentor, Anne and Lisbeth for coming to all the appointments with me, and DSSE for helping me. Phoebe, my sister for taking all the fabulous photographs and Bryony for designing my posters and t-shirts. Everyone at Dyslexia Scotland for getting on board and supporting me and letting me take part in all their DAW events. 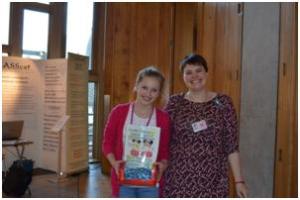 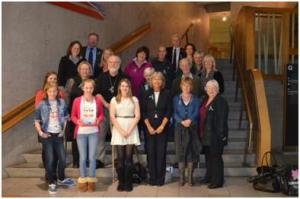 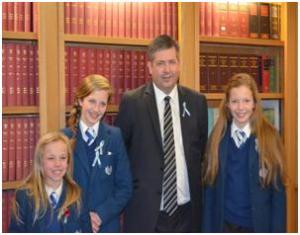 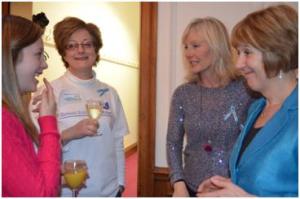